Motion Detectors: How They Work, How To Choose—& Why You Need One 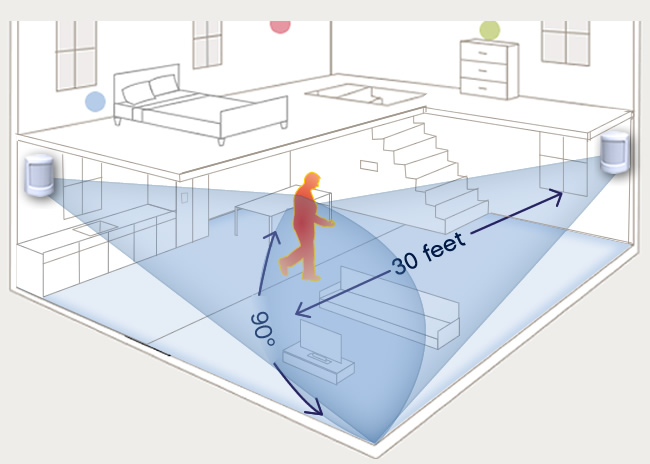 What's the best way to make sure no one's sneaking around your house at night? That's a no-brainer—a motion detector would have that creep behind bars in no time. But what kind of motion detector is right for YOUR home? That one's trickier. With so many types and technologies, you might be tempted to throw your hands up and try your luck with a baseball bat—but don't give up just yet! Here's a handy breakdown to help you get the most effective protection for your lifestyle, without getting bogged down by tech specs.

WHAT KINDS OF MOTION SENSORS ARE THERE?

Get a lot of visitors? Mount one of these sensors outside and it will let you know if someone is walking, biking, driving, or riding a dinosaur up toward your house. Though mainly used for driveways, these alerts are also good for watching over other outdoor structures, such as stables, pools, or sheds. There's a wide array of driveway motion detectors available, and if the idea sounds right for you, there are a few things you should consider before settling on one:

A motion-triggered light works like a driveway alert, but instead of just letting you know when it senses motion, it turns on a light for the world to see. If the illuminated figure is a burglar, he'll skedaddle, but if it's you, you'll be able to make it to your front door without tripping. Win/win. There are all different kinds of lights available, from "intimidating helicopter-style floodlight that pins you in place" to "welcoming, but still revealing, electronic lantern." Some units let you choose your own light. Look for one that has a timer or a photoelectric cell so that it automatically switches off during the day, when it would be useless anyway.

Want all the protection of a snarly German Shepard without any of teeth? Put one of these near your front door and it will "bark" angrily when someone approaches. Many models sense movement through doors and windows, so you can keep them snug inside. Some are fancy and change the speed, volume and type of bark depending on how far away the visitor is. Others can be set to less-fraught sounds, like bells or rainforest noises, when you're expecting friendly visitors. It's the most flexible pet you'll ever have.

Indoor motion sensors are an integral part of most home security systems. When combined with other sensors, they help to give a home full coverage — if an intruder sneaks into the home in some unexpected way, his movements will get caught the second he strides towards your flatscreen TV. There are many, many types available, but before you get into design decisions (black or white?) or technical specs (how big do you want your area of coverage?), there are a couple of basic decisions to make:

HOW DO MOTION SENSORS WORK?

There are four types of motion-sensing technology available, and each has its ups and downs. Here's an overview:

What's the craziest thing you've ever done with a motion sensor? Tell us in the comments!

Get offers and security advice